Labour Humanists brings like-minded people together to influence Labour Party policy on key humanist and secularist issues. We are affiliated to the British Humanist Association (BHA) and we aim to become an affiliated society of the Labour Party.

Our supporters come from across Labour, and include many elected representatives, all of whom share a humanist outlook and a desire to see a more equal society with no religious privilege or discrimination in public life and public services.

We want Labour to take a secularist and rationalist approach as it shapes its policies in opposition and as it makes law and public policies when in government.

We are committed to: 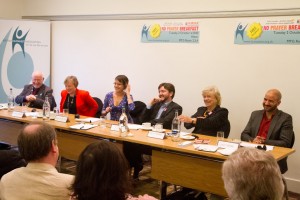 We work in a number of ways to influence Labour Party policy, including:

The best way we can hope to make the biggest impact, however, is through growing our membership and supporter base. The larger voice we have within Labour the more effective we can be in achieving our aims.

How we are run

Labour Humanists is organised by a small voluntary committee, who consist of:

For the equivalent of just £1 a month you can join us as a member.

If you want to find out more about what we do and what we stand for – and how you can get involved, sign up to our email list, drop us an email, or follow us on Twitter.